God should be on the altar. But God is not where there is corruption. Therefore an impure body has a desecrated altar without God

(CEV) “The Poem of the Man-God,”, Vol. 1, p. 664
Jesus says: “Today I say to you: “Do not fornicate. Do not look round endeavoring to read the word “lustful” on somebody’s face. Love one another. Would you love anyone who read that word on your face? No, you would not. Well, then, do not try to read it in the worried eyes of your neighbor or on his forehead that blushes and bows to the ground. And then… Oh! tell Me, especially you men.

Which of you has not tasted this bread made with ashes and excrement, which is sexual satisfaction? And is lust only what carries you for one hour between the arms of a prostitute? Is lust not also the desecrated union with your wife, desecrated because it is ratified vice as it is reciprocal sensual satisfaction, which, however, evades its consequences?”

Marriage means procreation and its act means and must be fecundation. Otherwise it is immoral.

You must not make a brothel of your nuptial beds. And that is what they become if they are soiled by lust and are not consecrated by maternity.

The earth does not reject the seed. It receives it and makes a plant of it. The seed does not escape from the furrow after being laid there. But it takes root at once and it strives to grow and bear fruit, that is the vegetable creature born of the union between soil and seed.

Man is the seed, woman is the soil, the fruit is the son. It is sinful to refuse to bear fruit and scatter strength in vice. It is prostitution performed on the nuptial bed, and in no way differs from the other prostitution, on the contrary it is aggravated by disobedience to the commandment that says: “Be one flesh and multiply by bearing children”.

Therefore, women deliberately barren, legal and honest wives in the eyes of the world, but not in the eyes of God, you can see that you may be considered prostitutes and you fornicate just the same even if only with your husbands, because you do not seek maternity but too often you are only after pleasure.

And do you not consider that pleasure is a poison that contaminates every mouth that tastes it? It burns with a fire that seems to satisfy, instead it falls out of the fireplace and devours, more and more insatiable, leaving a sour taste of ash on the tongue as well as disgust, nausea and contempt both of oneself and of the partner in pleasure, because when a conscience revives, and it does revive between two heats, one can but feel such contempt of oneself, being lowered below the level of beasts.

“You shall not fornicate” it is said.

A great deal of the carnal actions of men are fornication. And I do not take into consideration the inconceivable nightmare union which Leviticus condemns with the following words:

“Man: you must not lie with a man as with a woman”

and “You must not lie with any animal, you would thereby become unclean.

And woman will do likewise and will not offer herself to an animal, because it would be a foul thing”.

But after mentioning the duty of husband and wife in marriage, which is no longer holy when it becomes barren through malice, I am going to speak of the true and proper fornication between man and woman performed out of reciprocal vice or for compensation in money or in gifts.”

The human body is a magnificent temple that contains an altar. God should be on the altar. But God is not where there is corruption. Therefore an impure body has a desecrated altar without God. Like a drunken person who wallows in mire and in the regurgitation of his own drunkenness, man lowers himself in the brutality of fornication and becomes worse than the most impure worm and beast.”

Tell Me, if among you there is anyone who has perverted himself to the extent of dealing with his body as one deals in fodder or animals at the market, which benefit did he gain?

Take your hearts in your hands, examine them, question them, listen to them, note their wounds, their pangs and then tell Me: was the fruit so sweet as to deserve such pain to a heart that was born pure and that you have compelled to live in an impure body, and to beat to give life and heat to lust, and to be worn out by vice?

Tell Me: are you so perverted that you do not sob secretly, hearing the voice of a child calling: “mummy”, or thinking of your mothers, you women of pleasure who have run away from home or have been driven out of them, so that the rotten fruit may not contaminate with its oozing rottenness the other good ones?

Thinking of your mothers who probably died broken-hearted, having to say: “I gave birth to disgrace?”

Do you not feel your hearts shudder with shame, when you meet an old solemn looking man because of his white hair and you consider that you have soiled your fathers’ heads with handfuls of mud and have exposed them to the scorn of their native country?”

Do you not feel your entrails writhe with regret when you see a happy wife or an innocent virgin and you have to say: “I have given up all that and I will never be like that again!?”

Do you not realize how miserable you are when you are thirsty for the kiss of a child and you dare not say: “Give me it” because you have killed lives at their birth, you have rejected them as boring burdens and as a useless hindrance, detached from the tree that had borne them, and thrown out to make dung, and now those little lives shout at you: “murderers!”?

But, above all, are you not terrified of the Judge Who created you and is waiting for you to ask you: “What have you done of yourself?

Did I, perhaps, give you life for that? How dare you come to My presence, you nest swarming with worms and putrefaction?

You have had everything of what was your god: pleasure. Go to the place of eternal malediction”. 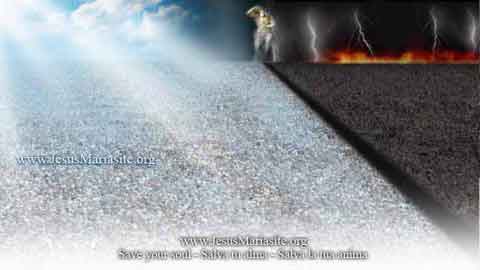 O humanity, how many will be lost!