St. Patrick of Ireland is one of the world’s most popular saints. He was born in Roman Britain and when he was fourteen or so, he was captured by Irish pirates during a raiding party and taken to Ireland as a slave to herd and tend sheep. At the time, Ireland was a land of Druids and pagans but Patrick turned to God and wrote his memoir, The Confession. In The Confession, he wrote:

“The love of God and his fear grew in me more and more, as did the faith, and my soul was rosed, so that, in a single day, I have said as many as a hundred prayers and in the night, nearly the same. I prayed in the woods and on the mountain, even before dawn. I felt no hurt from the snow or ice or rain.”

Patrick’s captivity lasted until he was twenty, when he escaped after having a dream from God in which he was told to leave Ireland by going to the coast. There he found some sailors who took him back to Britain and was reunited with his family.

A few years after returning home, Patrick saw a vision he described in his memoir:

“I saw a man coming, as it were from Ireland. His name was Victoricus, and he carried many letters, and he gave me one of them. I read the heading: ‘The Voice of the Irish.’ As I began the letter, I imagined in that moment that I heard the voice of those very people who were near the wood of Foclut, which is beside the western sea-and they cried out, as with one voice: ‘We appeal to you, holy servant boy, to come and walk among us.'”

The vision prompted his studies for the priesthood. He was ordained by St. Germanus, the Bishop of Auxerre, whom he had studied under for years, and was later ordained a bishop and sent to take the Gospel to Ireland.

Patrick arrived in Slane, Ireland on March 25, 433. There are several legends about what happened next, with the most prominent claiming he met the chieftan of one of the druid tribes, who tried to kill him. After an intervention from God, Patrick was able to convert the chieftain and preach the Gospel throughout Ireland. There, he converted many people -eventually thousands – and he began building churches across the country.

He often used shamrocks to explain the Holy Trinity and entire kingdoms were eventually converted to Christianity after hearing Patrick’s message.

Patrick preached and converted all of Ireland for 40 years. He worked many miracles and wrote of his love for God in Confessions. After years of living in poverty, traveling and enduring much suffering he died March 17, 461.

He died at Saul, where he had built the first Irish church. He is believed to be buried in Down Cathedral, Downpatrick. His grave was marked in 1990 with a granite stone.

Patrick was a humble, pious, gentle man, whose love and total devotion to and trust in God should be a shining example to each of us. So complete was his trust in God, and of the importance of his mission, he feared nothing -not even death.

Patrick’s poem of faith and trust in God: 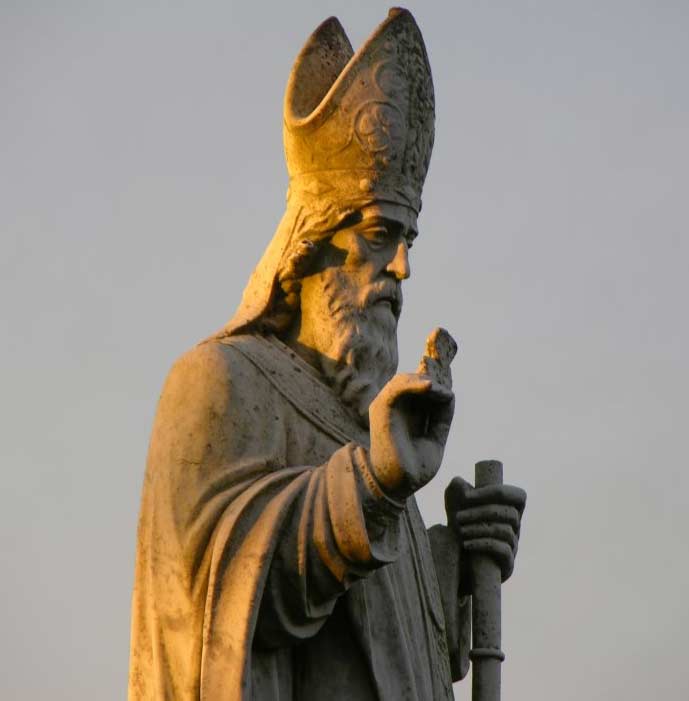 Pray with confidence St. Patrick’s intercession before God for the salvation of your soul and of your beloved ones, then also ask for your material needs if inline with the path of salvation.

Great trials are approaching for humanity

5/2/2016: Many idols of your world have already sold their souls to My adversary in exchange for...

Mother of God: The time for war is ripe

Pope Benedict [...] is getting weaker and weaker and it is more and more difficult for him to hold...

December 2016: Coming battle between your President-Elect and One World Order people

You could still see a potential martial law, if this is the last resort to keep your...