Josephine Margaret Bakhita, was a Sudanese-born former slave who became a Canossian Religious Sister in Italy, living and working there for 45 years

St. Josephine Bakhita was born in Sudan in 1869. This African flower, who knew the anguish of kidnapping and slavery, bloomed marvelously in Italy, in response to God’s grace, with the Daughters of Charity, where everyone still calls her “Mother Moretta” (our Black Mother”).

Bakhita was not the name she received from her parents at birth. The fright and the terrible experience she went through made her forget the name her parents gave her. Bakhita, which means “fortunate”, was the name given to her by her kidnappers.

Sold in the markets of El Obeid and Khartoum, she experienced the physical and moral humiliations and sufferings of slavery. In the Sudanese capital, Bakhita was bought by an Italian consul, Callisto Legnani. For the first time since the day she was kidnapped, she realized with pleasant surprise that no one used the lash when giving her orders; instead, she was treated with love and cordiality. In the consul’s residence Bakhita experienced peace, warmth and moments of joy, eventhough veiled with nostalgia for her own family whom, perhaps, she had lost forever.

The political situation forced the consul to leave for Italy. Bakhita asked and obtained permission to go with him and a friend of his, a certain Mr. Augusto Michieli. On their arrival in Genoa, Mr. Legnani, at the request of Mr. Michieli’s wife, agreed to leave Bakhita with them. She followed the new “family”, which settled in Zianigo, near Mirano Veneto. 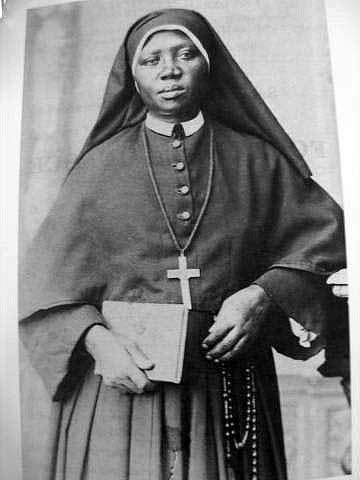 When their daughter Mimmina was born, Bakhita became her babysitter and friend. The acquisition and management of a large hotel in Suakin on the Red Sea forced Mrs. Michieli to move to Suakin to help her husband. Meanwhile, on the advice of their administrator, Mimmina and Bhakita were entrusted to the Canossian Sisters of the Institute of Catechumens in Venice.

It was there that that Bakhita came to know about God, whom “she had experienced in her heart without knowing who he was” since she was a child. “Seeing the sun, the moon and the stras, I said to myself: who could be the Master of these beautiful things? And I felt a great desire to see him, to know him and to pay him homage…”.

After several months in the catechumenate, Bakhita received the sacraments of Christian initiation and was given a new name, Josephine. It was 9 January 1890. She did not know how to express her joy that day. Her big and expressive eyes sparkled, revealing deep emotions. From then on, she was often seen kissing the baptismal font and saying: “Here, I became a daughter of God!”.

When Mrs. Michieli returned from Africa to take her daughter and Bakhita, the latter, with unusual firmness and courage, expressed her desire to remain with the Canosian Sisters and to serve that God who had shown her so many proofs of his love. The young African, who by then had come of age, enjoyed the freedom of choice which Italian law garanteed.

Bakhita remained in the catechumenate where she experienced the call to be a religious and to give herself to the Lord in the Institute of St. Magdalene of Canossa. On 8 December 1896 Josephine Bakhita was consecrated forever to God, whom she called by the sweet name of “the Master!”. For the next 50 years this humble Daughter of Charity, a true witness to the love of God, lived in the Schio community, involved in various services: cooking, sewing, embroidery and attending to the door. 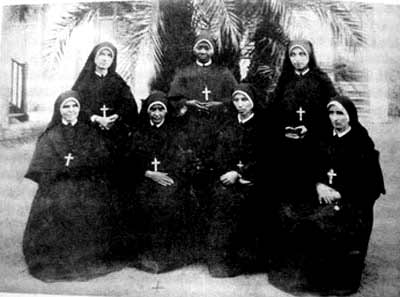 When she was on duty at the door, she would gently lay her hands on the heads of the children who daily attended the Canossian schools and caress them. Her amicable voice, which had the infection and rhythm of music of her country, was pleasing to the little ones, comforting to the poor and suffering and encouraging to those who knocked at the institute’s door.

Her humility, simplicity and constant smile won the hearts of all the citizens. Her sisters in the community esteemed her for her constant sweet nature, exquisite goodness and deep desire to make the Lord known. “Be good, love the Lord, pray for those who not know him. What a great grace it is to know God!”, she said.

As she grew older she expereinced long, painful years of sickness. Mother Bakhita continued to witness to faith, goodness and Christian hope. To those who visited her and asked how she was, she would respond with a smile: “As the Master desires”. During her agony, she relived the terrible days of her slavery and more than once begged the nurse who assisted her: “Please, loosen the chains…they are heavy!”.

It was Blessed Mary who freed her from pain. Her last words were: Our lady! Our Lady!”, and her final smile testified to her encounter with the Lord’s Mother.

Mother Bakhita breathed her last on 8 February 1947 at the Canossian convent in Schio, surrounded by the sisters. A crowd quickly gathered at the convent to have a last look at their “Mother Moretta” and ask for her protection from heaven. The fame of her sanctity has spread to all the continents and many receive graces through her intercession.

Loving God, rewarder of the humble, you blessed St. Josephine Bakhita with charity and patience.

May her prayers help us, and her example inspire us to carry our cross and to love you always.

Pour upon us the spirit of wisdom and love with which you filled St. Josephine Bakhita.

By serving you as she did, may we please you by our faith and our actions.

Grant this through our Lord Jesus Christ, your Son, who lives and reigns with you and the Holy Spirit, one God, for ever and ever. Amen

Our Father, Hail Mary and Glory Be