The Antichrist is already among you, he only needs to make his declaration to the world in order to make himself known to humanity

July 23 2019
Urgent call from Jesus the Good Shepherd to His Flock.
Message to Enoch.

“My children, I bring you my Peace.

Be alert and vigilant because the Illuminati Elites ruling this world, already have everything planned to usher in the reign of my adversary. The demons you call Aliens are allied with the Elites and the rulers of the world powers. It is they, the so-called extraterrestrial aliens, the ones who guide and advise through the Elites, all the rulers of the great nations.

They have everything already planned in order to destabilize the economy and the world peace, so that the world will be in chaos; so that in the midst of this crisis, the Antichrist may appear as peacemaker and savior of humanity. Those of you that are of my flock, will easily discern the Show of deception, when the false messiah appears; but the vast majority of this ungrateful and sinful humanity, that walks far from Me, will run to welcome him, they will worship him, and will announce to the whole world, that the Messiah has returned. The Antichrist is already among you, he only needs to make his declaration to the world in order to make himself known to humanity.

Beware, you let yourselves be deceived Flock of mine; you well know that the Son of Man will no longer set foot on this world! My Second Coming will be in Glory and Splendor; I come to reign over my people in my New and Heavenly Jerusalem. Therefore keep all this in mind, so that when the son of perdition appears, saying that he is the Cosmic Christ, the Architect of the Universe, the Maitreya, the Instructor of the World, you are already prepared and do not pay attention to the deception.

The disciples of my adversary and his forerunner travel the world, indoctrinating humanity far from Me; they are preparing and paving the way for the appearance of the false messiah. All the means, the economic ones and the media of this world, will serve my adversary. The world Elites who rule in darkness and spare no expense; through their foundations they will hand out money to the governments of the poorest countries, so that their rulers can prepare their peoples to welcome the son of perdition.

Very soon my flock, the Show of Deception will begin; holographic images will be projected on the firmament of all nations, representing the god who predominates in each nation, according to its religion. If most of the inhabitants inside a nation are Catholic, the image they will project in the firmament will be one that represents Me, as the Good Shepherd. If the predominant religion in other nations is Buddhism, the projected image will be of Buddha; if the predominant religion is Islamism, the image projected on those nations will be of Muhammad. These images will speak, will move, and many unwary will fall into the trap; after a time of indoctrination they will all merge into one and the image of the Maitreya, as the one true god will appear. This will be the beginning of the Show of deception.

Ungrateful and sinful humanity, what a sadness I feel in seeing so many who will turn their backs on Me to follow the false messiah! The vast majority of this humanity, in seeing the Maitreya, will enter into euphoria; many will weep and will hit their chests, they will praise and worship him as if he were God himself. Hypocritical Pharisees, I came in the Name of my Father and you did not recognize Me, but you rejected and condemned Me to die on the cross; another one that is not Me, will soon appear usurping my Name, and this one you will receive jubilant and will proclaim all over the world his arrival! Poor you that reject the Light of the World, which I am, to welcome the god of darkness, who will give you eternal death as a reward!

Prepare my flock, because the Maitreya is about to announce himself to humanity, as the expected messiah. Again I say unto you, my flock; you cannot see or hear him, because he has the power to make you love him and follow him. His appearance in the world will be after your passage through eternity(1). The mediatic show is about to begin, as it is for the holographic projections; they will begin by indoctrinating humanity with propaganda and with projection of images in the firmament, to prepare mankind for the appearance of the Antichrist.

My flock, pray, fast and do penance; strengthen yourselves as much as you can with my Body and my Blood, so that your spirit may be strengthened; read my Word in Matthew 24, Precursory Signs and meditate it, so that you do not fall into the deception of the false messiah.

My Peace I leave you, my Peace I give you. Repent and be Converted, for the Kingdom of God is near.

Your Master, Jesus the Good Shepherd.

Let my messages be known to all mankind, flock of mine.” 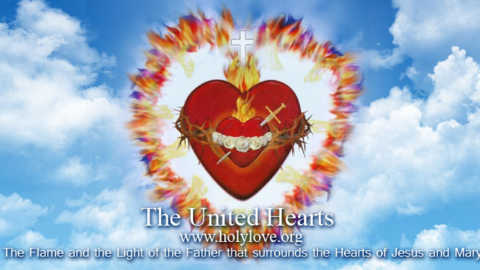 If you do not discover the grace I offer you, you can easily be misled and follow the path of...

The days of the war are approaching

Your indecent fashion crucify Me

Jesus: My Church is about to be divided, the schism is near

St. Pius: Don’t get tired of praying and propagating the Holy Rosary

No more extraordinary ministers of the Eucharist, no more communion in the hand!

Many of my Predilects are desecrating my Houses

The world is about to go into chaos

The world is about to enter the great turmoil

March 2017: The Truth of the Commandments has become controversial. The public display is challenged