The hole in the wood does not correspond to the carpus. So they take a rope, they pull it until the joint is dislocated, tearing tendons and muscles,

Four brawny men, who look like Judaeans, […] jump from a path onto the place of the execution. They show to the condemned men scoffing at them. The crowd is excited with cruel frenzy.

The centurion offers Jesus the amphora, so that He may drink the anesthetic mixture of myrrhed wine. But Jesus refuses it.

It is Jesus’ turn.. He lies on the cross meekly. […] He lies down and places His head where they tell Him. He stretches out His arms and His legs as He is told. […]

Two executioners sit on His chest to hold Him fast.[…] A third one takes His right arm, holding Him with one hand on the first part of His forearm and the other on the tips of His fingers. The fourth one, who already has in his hand the long sharp-pointed quadrangular nail, ending with a round flat head […], watches whether the hole already made in the wood corresponds to the radius-ulnar joint of the wrist. It does. The executioner places the point of the nail on the wrist, he raises the hammer and gives the first stroke.

Jesus, Who had closed His eyes, utters a cry and has a contraction because of the sharp pain, and opens His eyes flooded with tears. The pain He suffers must be dreadful… The nail penetrates, tearing muscles, veins, nerves, shattering bones…

Mary replies to the cry of Her tortured Son with a groan that sounds almost like the moaning of a slaughtered lamb; […]

The right hand is now nailed. They pass on to the left one.

The hole in the wood does not correspond to the carpus. So they take a rope, they tie it to the left wrist and they pull it until the joint is dislocated, tearing tendons and muscles, besides lacerating the skin already cut into by the ropes used to capture Him. The other hand must suffer as well, because it is stretched as a consequence, and the hole in it widens round the nail. […]

But Jesus no longer utters cries, He only moans in a deep hoarse voice with His lips firmly closed, while tears of pain fall on the ground after falling on the wood.

It is now the turn of His feet. […] Although they try to keep the feet still, holding them by the malleoli and toes on the wedge, the foot underneath is shifted by the vibrations of the nail, and they have almost to unnail it, because the nail, which has pierced the tender parts and is already blunt having pierced the right foot, is to be moved a little closer to the centre. And they hammer, and hammer, and hammer…[…]

The cross is now dragged near the hole and it jerks on the uneven ground shaking the poor Crucified. The cross is raised and twice it slips out of the hands of those raising it; the first time it falls with a crash, the second time it falls on its right arm, causing terrible pain to Jesus, because the jerk He receives shakes His wounded limbs. […] 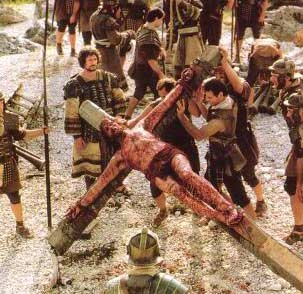 They raise the robbers who, once they are placed in a vertical position, shout as if they were being flayed alive […] Jesus is silent. The crowd instead is no longer silent. The people resume bawling in a hellish way.

Passion: His blood be on us and on our children

The Shroud: The only witness of the instant of Jesus’ Resurrection

Passover: The Agony and the Arrest at Gethsemane