I tell you once again: I am the Christ, the Son of God. I cannot lie. I am the High Priest, the Eternal Priest

The painful journey begins along the stony lane leading from the clearing, where Jesus was arrested, to the Kidron, and thence, along another lane, to town. And gibes and torture begin at once. Jesus, His wrists and even His waist tied as if He were a dangerous madman, the ends of the ropes entrusted to energumens intoxicated with hatred. […]

Some people in the meantime have gone down to the gravel-bed to get pebbles and stones and from below a shower of stones strikes the easy target. […] He is the tallest among all of them, so it is easy to strike Him, to seize Him by the hair compelling Him to throw back His head violently and to fling on it handfuls of filthy stuff, which by force goes into His mouth and eyes, causing nausea and pain.

The scene becomes more and more violent the closer they get to town. Before arriving at the walls […] there is John with Peter. […] They have covered their heads with their mantles to conceal their faces. But when Jesus arrives, John drops his mantle and shows his upset face[…]Peter dares not show his face. But he comes forward to be seen… Jesus looks at them… and He smiles with infinite kindness.[…]

To the house of the High Priest Anna

Jesus […] proceeds along the street that forms a bend uphill to go to […] Annas’ house, where they want to take Him[…]. A tall iron door opens in the massive wall. […] so that the bawling crowd, with the Prisoner in the middle of them, may go in.

The High Priest Anna: «Who are You?»

Jesus: «Jesus of Nazareth, the Rabbi, the Christ. And you know Me. I have not acted in darkness»

The High Priest Anna: «No, not in darkness. But You have led the crowds astray with obscure doctrines. And it is the Temple’s right and duty to protect the souls of the children of Abraham.»

Jesus: «The souls! Priest of Israel, can you say that you have suffered for the soul of the least or greatest person of this people?»

The High Priest Anna: «And what about You? What have You done that may be called suffering?»

Jesus: «What have I done? Why do you ask Me? The whole of Israel speaks about Me. From the holy city to the poorest village, even stones speak to say what I have done.

I have given sight to blind people: the sight of their eyes and of their hearts. I have opened the ears of deaf people: to the voices of the Earth and of Heaven. I have made cripples and paralytics walk, so that they might begin marching from the flesh towards God and then proceed with their spirits.

I have cleansed lepers of the leprosy pointed out by the Mosaic Law and of that which makes man polluted in the eyes of God: sin. I have raised the dead, but I do not say that it is a great deed to call a body back to life, but it is a great thing to redeem a sinner, and I have done that. I have helped the poor, teaching greedy and rich Hebrews the holy precept of love for our neighbor […]»

The High Priest Anna: «Do You dare say that You can remit sins? How can You do it?»

Jesus: «If with a little lustral water and the sacrifice of a ram it is lawful and credible to cancel a sin, expiate it and be cleansed of it, why will My tears. My Blood and My will not be able to do so?»

The High Priest Anna: «You say that we are greedy and we ignore the precept of love…» […]

Jesus: «Is it perhaps not true? Why are you killing Me? Because you are afraid that I may dethrone you. Oh! be not afraid. My Kingdom is not of this world. I leave you the masters of all power. The Eternal Knows when to utter the “Enough” that will make you drop thunder-struck...» […]

I am Light. Light and Truth. I have spoken openly to the world, I have taught in synagogues and in the Temple, where the Judaeans meet, and have said nothing secretly. I repeat it. Why do you ask Me? Ask those who have heard what I have said. They know.» […]

Another bravo gives Him a slap in the face shouting:

Bad Guy: «Is that how You reply to the High Priest?»

Jesus remains with the torturers. Blows with ropes, spittle, insults, kicks, the tearing of His hair, is what is left for Him, until a servant comes to say that the Prisoner is to be taken to Caiaphas’ house.

Jesus is brought to Caiaphas

Then the session begins.[…] 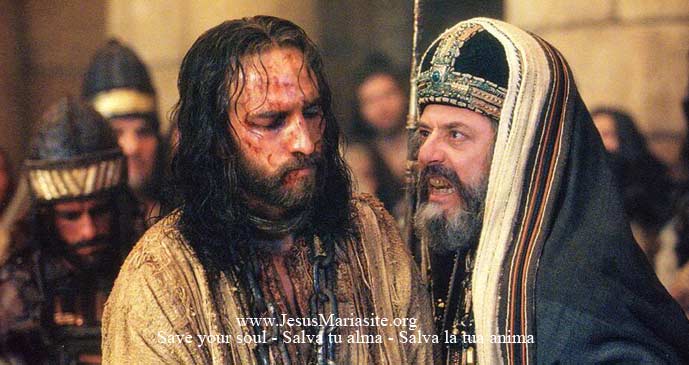 Caiaphas: “What have the holy members of this Council to say with regard to this man?»

False Witness: «I have seen him live with well-known prostitutes. Feigning He was a prophet, He turned His haunt into a brothel, and with heathen women of all people.»

False Witness: «He said that He wanted to destroy the Temple and rebuild it in three days with the assistance of demons.»

False Witness: «No. He said: it will not be built by man.»

Caiaphas comes down from his seat and approaches Jesus. […]

Caiaphas: «Reply to me, then. I am Your Pontiff. I adjure You by the living God. Tell me: are You the Christ, the Son of God?»

Jesus: «You have said it. I am. And you will see the Son of man, sitting on the right hand of the power of the Father, come on the clouds of the sky. Moreover, why do you ask Me? I have spoken in public for three years. I have not said anything secretly. Ask those who have heard Me. They will tell you what I have said and what I have done.»

One of the soldiers who is holding Him, strikes His mouth, making it bleed once again, and he shouts:

Jesus: «If I have spoken the truth, why do you strike Me? If I have said something wrong, why do you not tell Me where I am wrong? I tell you once again: I am the Christ, the Son of God. I cannot lie. I am the High Priest, the Eternal Priest.»

And I alone wear the true Rational, on which it is written: Doctrine and Truth. And I am faithful to both, even to death, ignominious in the eyes of the world, holy in the eyes of God, and until the blissful Resurrection.

I am the Anointed One. Pontiff and King I am. And I am about to take My scepter and with it, as with a winnowing-fan, I will clear the threshing-floor. This Temple will be destroyed and it will rise again, new and holy. Because this one is corrupt and God has abandoned it to its destiny.”

They all shout in chorus.

Accusers: «Will You do that in three days, You silly possessed man?»

Jesus: «Not this one. But Mine will rise again, the Temple of the true, living, holy, three times holy God.»

Caiaphas raises his clucking voice, he tears his linen garments with affected horror, and he says:

Caiaphas: «What else have we to hear from witnesses? He has blasphemed. So what shall we do?»

And all in chorus:

Please help spread these messages of faith, hope, salvation, collaborate with God's Plan of Salvation. Who helps the Lord save a soul predestine his own, independently from the outcome.

Passover: I am the Way, the Truth, the Life

Passover: The Way of the Cross

Passover: Descend from the cross and we will believe

The Shroud: The only witness of the instant of Jesus’ Resurrection