Pilate: Jews, listen. You have brought me this man as an instigator of the people. I have examined Him and I have not found any of the crimes you accuse Him

Dawn is breaking and the sky looks greenish. An order is given: the Prisoner is to be taken back to the Council Hall for a more legal trial. It is just the moment in which Peter for the third time denies that he knows the Christ, when the latter is passing by, already marked by sufferings. And, in the greenish dawn light, His bruises look even more dreadful on His wan face, and His eyes more sunken and glassy: a Jesus made dull by the sorrow of the world… A derisory sarcastic mischievous cock-crowing rends the air just beginning to stir at dawn. And at this moment of deep silence brought about by the appearance of the Christ, only Peter’s harsh voice is heard to say:

A resolute decided statement, to which replies at once, like a sneer, the cheeky crowing of the cockerel. Peter gives a start. He turns round to run away and he finds himself facing Jesus, Who looks at him with infinite compassion, […] Peter sobs and he goes out staggering as if he were drunk. He runs away behind two servants, who go out into the street, and he disappears down the semi-dark street.

Jesus is brought to Pilate

Jesus enters into the Praetorium in the middle of the ten soldiers […] The chief priests, scribes and elders come forward and they bow servilely and stop in the little square which is before the Praetorium. […] 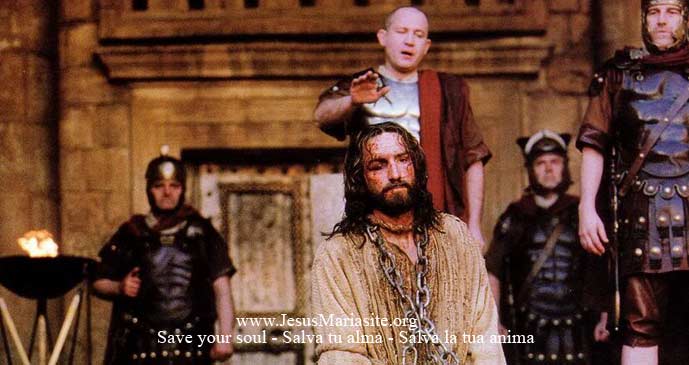 Pilate: «What charges do you bring against Him? He seems innocent to me…»

Pharisees «If He were not an evil-doer, we would not have brought Him to you.»

And in their eagerness to accuse Him they come forward. […]

Scribes and Pharisees: «We have found out that He was causing disturbances in our country and was preventing people from paying the tribute to Caesar, saying that He is the Christ, the king of the Jews.»

Pilate goes back to Jesus, Who is in the middle of the hall, left there by the soldiers, tied but without escort, so obvious is His meekness. And he asks Him:

Pilate: «Are You the king of the Jews?»

Jesus: «Are you asking this of your own accord, or through the insinuation of other people?»

Pilate: «[…] Your country and its leaders have handed You over to me, that I may judge You. What have You done? I know that You are loyal. Speak. Is it true that You aspire at reigning?»

Jesus: «My Kingdom does not come from this world. If it were a kingdom of this world, My ministers and my soldiers would have fought to prevent the Jews from arresting Me. But My Kingdom is not of the Earth. And you know that I do not seek power.»

Pilate: «That is true. I know. I have been told. But You do not deny that You are a king?”

Jesus: «You assert it. I am a King. That is why I came into the world: to bear witness to the Truth. Those who are on the side of the Truth listen to My voice.» […]

The crowd riots, seized with the panic fear of losing the prey […] and they shout:

Scribes and Pharisees: «He is a rebel!”, “A blasphemer”, “He encourages libertinism”, “He instigates people to rebel”. […]»

Pilate is pensive… And he decides:

Pilate: «Let a century take Him to Herod to be judged. He is Herod’s subject. […]»

Jesus is brought to Herod

He is now in the hall, in front of Herod. And behind Him, there are the scribes and Pharisees, who feel at their ease here, and who come in to make their false charges.

Herod: «You are great. I know.” […] “I heard that they accuse You of rebelling against Rome. Are You not the promised rod to strike Assur?»

Herod: «They told me that You predict the end of the Temple and of Jerusalem. But is the Temple not eternal as a spirit, since it was wanted by God Who is eternal?»

Herod: «Are You mad? Have You lost Your power? Is Satan preventing You from speaking? Has he abandoned You?»

Herod: «Enough. […] You are mad. A white garment. Clothe Him with it so that Pontius Pilate may know that the Tetrarch took his subject to be mad. […]»

And Jesus, tied once again, goes out, With a linen tunic reaching down to His knees, on top of His red woollen garment. And they go back to Pilate.[…]»

[Pilate] goes towards the crowd, stopping again in the middle of the hall.

Pilate: «Jews, listen. You have brought me this man as an instigator of the people. I have examined Him in your presence and I have not found in Him any of the crimes of which you accuse Him. Herod did not find more than I did. And he has sent Him back to us. He does not deserve death. Rome has spoken. But, in order not to displease you, depriving you of the amusement, I will give you Barabbas. And I will order Him to be given forty lashes. That is enough.»

Pilate: «But listen! I said I will have Him lashed. Is that not enough? I will have Him scourged, then! It is terrible, you know? He may die through it. What wrong has He done? I can find no fault in Him. And I will set Him free.»

Crowd: «Crucify Him! Crucify Him! Death to Him! You are the protector of criminals! Heathen! You are Satan, too! […]»

Pilate: «Let Him be scourged»

Passover: Descend from the cross and we will believe

Passover: The Agony and the Arrest at Gethsemane

Passover: “Everything Is Accomplished”