Satan does not sleep. Dear children! God gave you the grace to live and to defend all the good that is in you and around you, and to inspire others to be better and holier; but Satan, too, does not sleep and through modernism diverts you and leads you to his way. 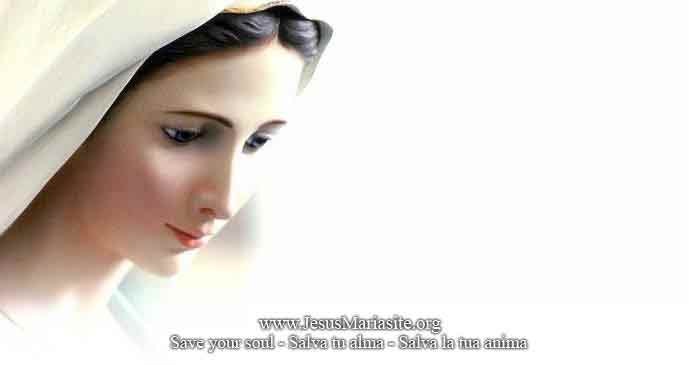 Apparition Of Our Lady Of Medjugorje, 1981, Bosnia-Hercegovina

Since 1981, in a small village in Bosnia-Hercegovina named Medjugorje, the Blessed Virgin Mary has been appearing and giving messages to the world. She tells us that God has sent Her to our world and, these years she is spending with us are a time of Grace granted by God. In Her own words She tells us, “I have come to tell the world that God exists. He is the fullness of life, and to enjoy this fullness and peace, you must return to God”.

Our Lady’s mission is one of peace and love. She has come to earth to reeducate us and to help us convert and recenter our lives back to God. Our Lady’s role has always been one of guiding people to Her Son, Jesus. What an amazing opportunity we have before us! It is important that we understand both the magnitude and the urgency of Our Lady’s call to conversion, and that we respond with all our hearts.

Our Lady continues to give messages to six people from the village of Medjugorje: Ivan, Jakov, Marija, Mirjana, Vicka, and Ivanka. These six people (referred to as “visionaries”) have had apparitions of the Blessed Virgin Mary since June 24, 1981. In addition to the public messages, Our Lady is to give each of the six visionaries a total of ten “secrets” or happenings that will occur on earth in the near future. Some of the secrets pertain to the whole world while others concern the visionaries themselves or the local village. Only one of the secrets has so far been revealed by the visionaries. Our Lady has promised to leave a supernatural, indestructable, and visible sign on the mountain where she first appeared. Our Lady said: “This sign will be given for the atheists. You faithful already have signs and you have become the sign for the atheists. You faithful must not wait for the sign before you convert; convert soon. This time is a time of grace for you. You can never thank God enough for His grace. The time is for deepening your faith and for your conversion. When the sign comes, it will be too late for many.”

When each of the six visionaries has received all ten “secrets”, Our Lady will stop appearing to them on a daily basis. Currently, Marija, Vicka, and Ivan have received nine secrets, and Our Lady still appears to them every day, wherever they are, at 5:40pm during daylight savings time, and 6:40pm the rest of the year. Mirjana, Jakov, and Ivanka have received all ten secrets, and Our Lady appears to them once per year, and will do so for the rest of their lives. For Ivanka who received her 10th secret on May 7, 1985 it is on the anniversary of the apparitions, June 25 each year. For Jakov who received his 10th secret on September 12, 1998, it is on Christmas day each year. And for Mirjana who received her 10th secret on Christmas 1982, it is on her birthday, March 18 each year. Our Lady has also been appearing to Mirjana on the 2nd of each month since August 2, 1987 for the purpose of praying for all unbelievers. Mirjana tells us that it is very important that all of us pray for the unbelievers in the world, who are described as those who have not yet experienced God’s love. Sometimes these appearances on the 2nd of each month are apparitions, and sometimes locutions. No one knows when Our Lady will give the tenth secret to Marija, Ivan, and Vicka.

Once Our Lady stops appearing there will be three warnings given to the world. Mirjana will witness the warnings and they will ocurr on the earth. Ten days before each of the warnings, she will advise the priest she chose for this task (Father Petar Ljubicic), who will then pray and fast with Mirjana for seven days. Then, three days before the warning is to take place, Fr. Petar will announce to the world what, where, and when the warning is to take place. Fr. Petar has no choice, and must reveal each warning. Mirjana’s testimony will be a confirmation of the validity of the apparitions and a further incentive for the conversion of the world. After the first warning, the others will follow within a rather brief period of time. After the three warnings, the permanent visible sign will be left on the mountain where Our Lady first appeared in Medjugorje. Those who are still alive will have little time for conversion. For that reason, the Blessed Virgin calls for urgent conversion and reconciliation. The permanent sign will lead to many healings and conversions before the messages become reality.

The ninth and tenth secrets are grave matters. They are a chastisement for the sins of the world. The punishment is inevitable because we can not expect the conversion of the entire world. The chastisements can be lessened by prayers and penance, but they can not be suppressed entirely. An evil which threatened the world according to the seventh secret, has been eliminated through prayer and fasting. For that reason the Blessed Virgin continues to ask for prayer and fasting. The invitation to prayer and penance wards off evil and war, and above all, saves souls. Our Lady says: “You have forgotten that with prayer and fasting you can ward off wars, suspend natural laws.”

Since the apparitions began in 1981, millions of people of all faiths, from all over the world, have visited Medjugorje and have left spiritually strengthened and renewed. Many bring back stories of miracles in the form of healings (of mind, body and soul), supernatural visual events, and deep conversions back to God. You owe it to yourself and your loved ones, to investigate with an open mind and heart the messages which are given to us by Our Lady of Medjugorje. I invite you to read these messages and decide for yourself how they will affect your life and that of your family.

Our Lady’s messages are meant to be assembled like a mosaic. To understand the full meaning and depth of these messages, we need to study all of the messages She has given us over these 28+ years. “By means of the messages, I wish to make a very beautiful mosaic in your hearts.” (November 25, 1989). Our Lady has asked that we continually read, study, and meditate on the messages which she has given us. She said: “Little children, read everyday the messages I gave you and transform them into life. I love you and this is why I call you to the way of salvation with God.” (December 25, 1989).

The technique of teaching which Our Lady uses, reeducates us to be Christians. She accomplishes this by walking with us and guiding us step by step, message by message. Today, many people think it is not important to be a Christian. Others want to live a superficial form of Christianity which is easier or more convenient than living a true Christian life. Our Lady wants to show us through Her messages the real face of Christianity. This is a long process because we as a society have strayed far from the truth and God and are slow to learn. This is true both in the church and outside the church. We have to accept being totally reeducated, little by little, by the Mother of God. The problem with mankind is not so much that people have bad intentions, there are plenty of good hearted people. The problem is that we sometimes don’t see the truth; we are in darkness, and many of us are just blind. We do not realize that we have put ourselves into the hands of satan because we do not know how to tell the difference between right and wrong. Many of us become the image of satan without even knowing it.

I don’t think that anyone could argue, regardless of religious orientation, that today’s world is in a state of crisis. All one has to do is read the newspaper or watch television to be see how eroded the morals of our world have become. It is shocking to see and hear the examples of inhumanity, cruelty, violence, abuse, drugs, war, crime, etc., etc. Much of the world has strayed far from a life centered around God and family. The answers which we need to redirect our life can be found by reading and living Our Lady’s messages and the Scriptures.

“You are ready to commit sin, and to put yourselves in the hands of satan without reflecting.” (May 25, 1987)

“Children, darkness reigns over the whole world. People are attracted by many things and they forget about the more important.”

“Light won’t reign in the world until people accept Jesus, until they live His words, which is the Word of the Gospel.”

“Dear children, this is the reason for my presence among you for such a long time: to lead you on the path of Jesus. I want to save you and, through you, to save the whole world. Many people now live without faith; some don’t even want to hear about Jesus, but they still want peace and satisfaction! Children, here is the reason why I need your prayer: prayer is the only way to save the human race.” (July 30, 1987)

We must realize that Satan is real. He uses us for his own end and purposes. His main purpose is destruction. Destruction of love, peace, faith, family, and life. Just as God gave David 5 stones with which to defeat Goliath, Our Lady is also giving us 5 Stones or Weapons we can use to defeat satan. They are:

Marian Apparitions of our Lady in Kibeho 1981 Rwanda

Apparition of Our lady in Pointmain 1871 France: Symbolism Finally Revealed

My Church is gaining enemies with speed. Italy suffers heavily

You must be united in love to be victorious