I am the Lady of Sorrows. If men do not repent and better themselves, the Father will inflict a terrible punishment on all humanity. It will be a punishment greater than the deluge, such as one will never seen before. Fire will fall from the sky and will wipe out a great part of humanity. 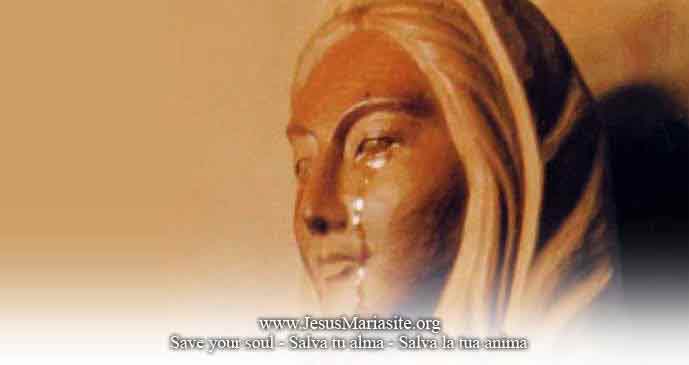 The Apparitions of of Our Lady in Akita, 1973, Japan

The Apparitions of the Blessed Virgin Mary to Sr. Agnes Sasagawa of Akita, Japan

The extraordinary events began on June 12, 1973, when Sr. Agnes saw brilliant mysterious rays emanate suddenly from the tabernacle. The same thing happened on each of the two days that followed. On June 28, 1973, a cross-shaped wound appeared on the inside left hand of Sr. Agnes. It bled profusely and caused her much pain. On July 6, Sr. Agnes heard a voice coming from the statue of the Blessed Virgin Mary in the chapel where she was praying. The statue was carved from a single block of wood from a Katsura tree and is three feet tall. On the same day, a few of the sisters noticed drops of blood flowing from the statue’s right hand. On four occasions, this act of blood flow repeated itself. The wound in the statue’s hand remained until September 29, when it disappeared. On September 29, the day the wound on the statue disappeared, the sisters noticed the statue had now begun to “sweat”, especially on the forehead and neck. On August 3, Sr. Agnes received a second message. On October 13, she received a final third message. Two years later on January 4, 1975, the statue of the Blessed Virgin began to weep. It continued to weep at intervals for the next 6 years and eight months. It wept on 101 occasions.

“My daughter, my novice, you have obeyed me well in abandoning all to follow me. Is the infirmity of your ears painful? Your deafness will be healed, be sure. Does the wound of your hand cause you to suffer? Pray in reparation for the sins of men. Each person in this community is my irreplaceable daughter. Do you say well the prayer of the Handmaids of the Eucharist? Then, let us pray it together.”

Prayer: “Most Sacred Heart of Jesus, truly present in Holy Eucharist, I consecrate my body and soul to be entirely one with Your Heart, being sacrificed at every instant on all the altars of the world and giving praise to the Father pleading for the coming of His Kingdom. Please receive this humble offering of myself. Use me as You will for the glory of the Father and the salvation of souls. Most holy Mother of God, never let me be separated from Your Divine Son. Please defend and protect me as Your Special Child. Amen.”

When the prayer was finished, the Heavenly Voice said:

“Pray very much for the Pope, Bishops, and Priests. Since your Baptism you have always prayed faithfully for them. Continue to pray very much…very much. Tell your superior all that passed today and obey him in everything that he will tell you. He has asked that you pray with fervor.”

Many men in this world afflict the Lord. I desire souls to console Him to soften the anger of the Heavenly Father. I wish, with my Son, for souls who will repair by their suffering and their poverty for the sinners and ingrates.”

In order that the world might know His anger, the Heavenly Father is preparing to inflict a great chastisement on all mankind. With my Son I have intervened so many times to appease the wrath of the Father. I have prevented the coming of calamities by offering Him the sufferings of the Son on the Cross, His Precious Blood, and beloved souls who console Him forming a cohort of victim souls. Prayer, penance and courageous sacrifices can soften the Father’s anger. I desire this also from your community…that it love poverty, that it sanctify itself and pray in reparation for the ingratitude and outrages of so many men.

Recite the prayer of the Handmaids of the Eucharist with awareness of its meaning; put it into practice; offer in reparation (whatever God may send) for sins. Let each one endeavor, according to capacity and position, to offer herself entirely to the Lord.

Even in a secular institute prayer is necessary. Already souls who wish to pray are on the way to being gathered together. Without attaching to much attention to the form, be faithful and fervent in prayer to console the Master.”

“Is what you think in your heart true? Are you truly decided to become the rejected stone? My novice, you who wish to belong without reserve to the Lord, to become the spouse worthy of the Spouse, make your vows knowing that you must be fastened to the Cross with three nails. These three nails are poverty, chastity, and obedience. Of the three, obedience is the foundation. In total abandon, let yourself be led by your superior. He will know how to understand you and to direct you.”

“My dear daughter, listen well to what I have to say to you. You will inform your superior.”

After a short silence:

“As I told you, if men do not repent and better themselves, the Father will inflict a terrible punishment on all humanity. It will be a punishment greater than the deluge, such as one will never seen before. Fire will fall from the sky and will wipe out a great part of humanity, the good as well as the bad, sparing neither priests nor faithful. The survivors will find themselves so desolate that they will envy the dead. The only arms which will remain for you will be the Rosary and the Sign left by My Son. Each day recite the prayers of the Rosary. With the Rosary, pray for the Pope, the bishops and priests.

The work of the devil will infiltrate even into the Church in such a way that one will see cardinals opposing cardinals, bishops against bishops. The priests who venerate me will be scorned and opposed by their confreres…churches and altars sacked; the Church will be full of those who accept compromises and the demon will press many priests and consecrated souls to leave the service of the Lord.

The demon will be especially implacable against souls consecrated to God. The thought of the loss of so many souls is the cause of my sadness. If sins increase in number and gravity, there will be no longer pardon for them

With courage, speak to your superior. He will know how to encourage each one of you to pray and to accomplish works of reparation.

It is Bishop Ito, who directs your community.”

And She smiled and then said:

“You have still something to ask? Today is the last time that I will speak to you in living voice. From now on you will obey the one sent to you and your superior.”

“Pray very much the prayers of the Rosary. I alone am able still to save you from the calamities which approach. Those who place their confidence in me will be saved.”

April, 1984—Most. Rev. John Shojiro Ito, Bishop of Niigata, Japan, after years of extensive investigation, declares the events of Akita, Japan to be of supernatural origin, and authorizes throughout the entire diocese the veneration of the Holy Mother of Akita.

On April 22, 1984, after eight years of investigations, after consultation with the Holy See, the messages of Our Lady of Akita were approved by the Bishop of the diocese. In the Japanese village of Akita, a statue of the Madonna, according to the testimony of more than 500 Christians and non-Christians, including the Buddhist mayor of the town, has shed blood, sweat and tears. A nun, Agnes Katsuko Sasagawa has received the stigmata and has received messages from Our Lady.

June, 1988—Vatican City—Joseph Cardinal Ratzinger, Prefect, Congregation for the Doctrine of the Faith, gives definitive judgement on the Akita events and messages as reliable and worthy of belief.

Marian Apparitions of our Lady in Kibeho 1981 Rwanda

Apparition of Our lady in Pointmain 1871 France: Symbolism Finally Revealed