Jesus: It is drawing close a great pandemic to reduce world population

Viruses of diseases are being scattered in the airspace of many nations; the kings of this world serving my adversary are supporting these campaigns

Jesus: It is drawing close a great pandemic to reduce world population

Jesus: It is drawing close a great pandemic which will reduce much of the world population!

My peace be with you sheep of my flock.

It is drawing close a great pandemic which will reduce much of the world population!

Viruses of diseases are being scattered in the airspace of many nations; the kings of this world serving my adversary are supporting these campaigns which are targeted to the called Third World countries, and it is aimed to reduce the infant and elderly people population.

In many countries, with the complacency of its governments, has been sterilizing female population, so that do not born life.

The high rates of poverty of many nations have been tapped by some Masonic foundations and organizations to develop women sterilization and abortion campaigns.

It is testing a vaccine and other kinds of medicines which are lethal because it sterilizes active female population but also it produces several kinds of uterine cancer.

Reproductive organ of women are being destroyed with these medicines which are looking for to end life and to reduce population of less developed nations.

Government companies and entities, which are serving freemasonry, give financially support to these campaigns of death, which are oriented to cut down population of poorest countries.

My children, the medicines that it is producing are not offering the benefices expected of it.

Mankind health became a business; many medicines are producing so negatives collateral effects that it aggravates the conditions of ill people.

Elderly population will be diminished; all this has been planned by the new world order which seeks to take control of humanity during my adversary’s time.

My children, you are already walking in the purification desert; hang on to me, and do not let go of my mother’s hand; trust and pray and be very careful because the path that you must pass is full of traps.

Remember that the battle is spiritual and on your prayer depends that everything goes according with My Father’s Will.

Do not forget that My Father respect your freewill and His Holy Will is favorable to His people as long His people keep praying, fasting and doing penance.

My father will give you victory according to your prayers; if you pray, fast and do penance in chain you will be victorious; but if you neglect praying and you put your trust in yourselves without ask for divine help, I assure you that you will be defeated and many will be lost.

My Father does not delight in your death or in your suffering, because you well know that the essence of God is Love, and Love who is God desires that you have life, and life in abundance.

My children review over, I say it again, the message of survival given to our instrument Mary Jane Even, for many pandemics and illnesses, which are approaching will be only healed with the natural medicines that we made known through that message.

I remind you that you are in purification times, and you cannot relax with your prayers, because my adversary, his emissaries and his evil host do not rest, they are seeking ways to make you lose.

Accompany me, in the silent of early morning, at 3:00 A.M. and at 3:00 P.M. for praying together the Divine Mercy Chaplet; the power of my mercy destroys all actions of the malignant and his agents of evil; offer it for this intention and you will see how all my adversary’s plans will be thwarted .

My peace I leave you and my peace I give you. Repent and be converted because the kingdom of God is at hand.

Your Master and Shepherd: Jesus, the Good Shepherd.

Make known my messages to all mankind.”

You will have a schismatic church teaching heresies

Inhabitants of the Earth stop destroying My creation

8/18/2016: Pollution and deforestation, together with the evolution of the sun, will bring drought... 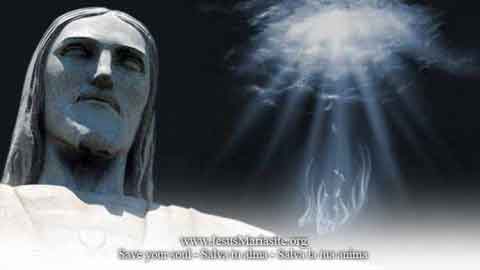 We can here explain how the archangel who was a benign, holy spirit -but not holy to the point of...

I repeat again: do not open your heart to anyone

Wake up, the days of Divine Justice are coming

The New World Order is about to be established

Jesus: War can burst at any time and the tribulation will begin

The Vicar of My Son, consecrate very soon Russia to My Heart

Support my Popes with prayers and do not leave my Church

Do not walk in distance from My Houses

God the Father: Respect the 10 Commandments

Vigilant to the cunning plans of the world leaders

Jesus: He is restoring prayer in the White House, and he uses My Name to bless your country