9 is the number, which the time is based upon. There are nine centuries in a unit of God's time. Alpha is God and Omega is God.

Raffaele, Archangel of God and Mary Queen of the Angels:

9 is the number, which the time is based upon. There are nine centuries in a unit of God’s time. Alpha is God and Omega is God.

The beginning and the end.

Just as God in the beginning created the universe, so He is going to take it to an end.

O WORLD, WHERE IS YOUR END?

At the fulfillment of nine units from the time of Christ’s death. Unilateral peace will begin at the completion of the 9th Unit, and by 1969, the 8th unit will become complete.

At the beginning of 1969 the time will be accelerated until there will be no way to calculate the exact end.

AT THE END OF THE 9TH UNIT OF GOD’S TIME, THE TRIBULATION WILL COME.

THE UNILATERAL PEACE, the peace for those who love God and follow Mary, the Mother of God, to the Safe Place where no harm can reach them. However, for those who follow Satan and refuse to abandon the mundane ways, there will be no peace until the Tribulation have hit them.

AT THE END OF THE TRIBULATION, THE 10TH UNIT WILL BEGIN. THIS WILL LAST ONE THOUSAND YEARS, BECAUSE EVERYTHING BE PERFECT.

The 10th unit will go back to the time when God created the universe, and it is limitless.

Do you understand the meaning of God’s time, the compression of time and its slowdown?

But, the continuous creation of the Earth is accelerated and it is also accelerated the acquisition of knowledge by men. Man, in his pride, thinks he has done it all by himself.

Yet, the material he uses for his technical progress has always been on Earth. Only the evolution or continuous creation of the mind of man has thus been compressed that God has allowed men to acquire the knowledge of the atom, the waves in the atmosphere and the power to create rockets and spaceships. This knowledge would take hundreds of years without God’s direct intervention. But, man, in his ignorance, thinks he has acquired this knowledge with his own brain.

The brain of man is smaller than the brains of many animals. What does then make the man think that his brain has created these wonders with his own hands? It is the mind of man who has now reached his CHILDHOOD; childhood that man believes to be the greatest that can happen to him. He is honest. He will be slowed down and will not be able to go beyond until he turns his mind to God, who is the only One who can teach man’s mind to reach its maturity.

The Tribulation does not need to come to punish the earth.

THE EARTH CAN BE PURGED FROM EVIL BY THE ANGELS AND IT CAN BE TRANSFORMED INTO THE NEW EARTH AT THE COMING OF CHRIST.

This depends on you. Because only if many people are going to pray the Rosary the reparation can be achieved.

God, in His mercy, still gives you the chance to do it. Raise your eyes to the heavens. Look at the stars in their whirling trajectory and let your mind be open to life-gift of the strength of the Eternal Mind of God.

Raffaele, Archangel of God and Mary Queen of the Angels

The book, “The Trial of America By God“, is a story of faith. It is the faith of a humble woman who let a force, she knew little about, take over her hand and guide her pen. And it takes the faith of the reader to accept these words for what they are, messages from Heaven. In 1968, Marjorie Sampair was living in a modest home in Tacoma, Washington. “She was an average woman who was busy with the affairs of her family, before she was called on by God to write a book.” You can find the story in the beginning of the book. For now, we would just like to give a brief explanation of how it was written. This book was written as many of the books in the Bible were written,  through a form of writing known as automatic writing. The pen is held lightly in the hand and begins to move seemingly of its own power. In Numbers 36:13 we read, “These are the commandments and judgments, which the Lord commanded by the hand of Moses to the children of Israel.” There are many other examples given in the Bible. A list of examples of how God wrote through the hand is available. While we do not wish to suggest that all automatic writing is from God, by your faith you will have to decide as to the authenticity of this book. Why was this book written? That question is best answered by Heaven. So read the excerpts given here, and pray to the Queen of Heaven for the gift of Faith. She will take your request to Christ, Her son. 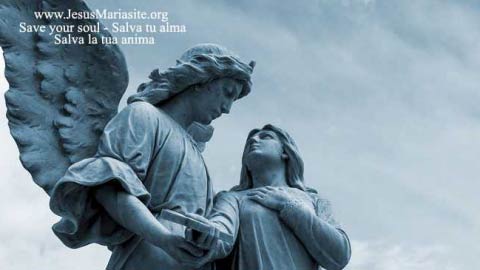 Apocalypse Revealed: The Return of Christ

Apocalypse Revealed: The order of last events in God’s Calendar

Apocalypse Revealed: How Mary will crush the head of satan

A new sexual aberration is taking place in this sinful world

Jesus of Nazareth: These are the times, for which you have been warned to prepare

August 2017: You cannot redefine My Commandments to suit your lifestyle

I will separate My sheep from Satan’s goats