This is the model of the New Earth: it is going to be a sphere that revolves slowly around the center of the universe, God

Chapter 20:
The New Heaven and the New Earth

«Are you ready to make a journey with your imagination to the NEW EARTH and see things in advance as if they were in a dream?

You live in the Northern hemisphere, in a small town in Oregon.

ALL EVIL HAS BEEN TAKEN AWAY FROM THE EARTH and time has ceased to exist, since no clock is shown and no one is in a hurry.

You know only the four seasons and observe the changes in the trees to mark the end of summer idleness and the beginning of the autumn work. You get up with the sun and rest when the sun sets, because CHRIST GOVERNS THE EARTH AND HIS WILL IS EXECUTED BY ALL.

During the summer the land produces its fruits without cultivation of the soil, while in autumn begins the work of gathering the food for winter.

Every job is done with this purpose. It is embellished with songs and happy cooperation, because everyone on earth participates in equal measure to the fruits of the harvest.

Lust is not accessible, because no one is better than his neighbor and everyone is subject to God. Everyone lives in peace and harmony.

In autumn leaders establish people’s needs for the next year.

ALL PLANS ARE APPROVED BY CHRIST, WHO GOVERNS WITH THE HELP OF THOSE WHO OVERCAME THE TRIBULATION BECAUSE CHILDREN OF MARY, TO WHOM THEY WERE PROMISED THEIR PLACE OF GOVERNORS.

Because evil no longer dulls man’s mind, the very young can learn the last secrets of the universe.

Oh, the years of peace will be one thousand, but only God knows time, not like man knows it.

Men cannot calculate the time of God, but will soon be used by everyone.

THE ONE THOUSAND YEARS OF PEACE AND TRANQUILITY MUST PREPARE MEN FOR THE NEW EARTH AND THE NEW HEAVEN.

All that has been said will be introduced gradually, until the whole Earth is finally brought to know the will of God.

THEN THE NEW EARTH WILL BE QUICKLY ESTABLISHED.

The sunlight will be used until the new Earth becomes reality.

The Four Seasons and the work program will be so described until the new Earth is ready and the plan of God finally accomplished.

YOU MUST KNOW THAT CHRIST WILL RULE THE EARTH WITH AN IRON ROD.

AND THOSE WHO NOW TURN TO MARY AND FULFILL HER DEMANDS, WILL GOVERN WITH CHRIST AND IN FULL ACCORD WITH THE WILL OF GOD.

Once evil is ended, the change in man will be extraordinary: the mind and soul  will progress so quickly that new ideas and new techniques will soon be discovered.

The description made now is a point placed half way from the old to the new. And even this is almost impossible for man’s mind to understand who lives in the imperfect chaotic order of today. There will be no more envy, pride and jealousy.

There will be no lies, no deceptions or other sad creations of slander and gossip. There will be no more poverty, wars and uprisings. There will be no pain, anger, blasphemy, impatience, laziness, nor evil of any kind. All will be as good as God is, as good the angels and saints are. All knowledge of sin will be eliminated and no taint of sin shall dirt the soul.

All evil men will be eliminated, for God shall destroy all the evil of the Earth.

There will be no demographic explosion, because those left on Earth will be few compared to the current population.

If evil will be destroyed during the long and intense tribulation as described in the Bible, all the cities and artifacts of men will be destroyed, leaving only rural regions, which will be rebuilt away from destruction.

HOWEVER, IF MANY PEOPLE TURN TO MARY, PRAY THE ROSARY, MEDITATE ON THE PASSION AND DEATH OF CHRIST AND CHANGE BEHAVIOR, THEN THE ERA OF PEACE COMES WITHOUT DESTRUCTION AND THE DESCRIBED BEAUTIES WILL GRADUALLY BECOME REALITY.

Men will continue to live, but with a new life without sin, sickness or death.

The new Earth will be created with a gradual process, as God has projected from the beginning».

“The New Earth is of God, because only through His mind continues to be created… Generated out of time, matter and spirit, that is God Himself. Created in the mind of God in which all things are created. New because it is out of the old…

New because it has never been known to men… New as it is new the new year.

Translate these concepts into reality as much as you can, and you will not yet understand the meaning of the new Earth.

The rest of time left to the old one must be consumed in consideration of the new Earth, or the new one will come WITHOUT preparation, and men will not understand what has happened.

This is the model of the New Earth: it is going to be a sphere that revolves slowly around the center of the universe, God.

Everything will revolve slowly, as the stars and planets will move faster and much farther away from the center.

DOES THE EARTH HAVE TO BE MOVE FROM ITS PLACE TO BE RENEWED? YES, BECAUSE ONLY THE LIGHT OF GOD CAN CAUSE THE CHANGES IN THE STRUCTURE OF THE ATOMS OF THE EARTH AND OF EVERY MATERIAL THAT IS ON EARTH.

BETWEEN GOD AND THE NEW EARTH THERE WILL BE THE FIRMAMENT OF THE HEAVENS WHERE THE ANGELS ARE GOING TO LIVE. THIS FIRMAMENT WILL BE FLOODED BY COSMIC LIGHT THAT WILL BE REFLECTED ON EARTH. THERE WILL ALSO BE A FIRMAMENT, OUT OF THE ORBIT OF THE EARTH, WHERE SAINTS WILL DWELL.

It will also be immersed in the cosmic light, so that the earth will be surrounded by light and there will be no night.

The Saints and the Angels can move at will and go wherever they want.

AND AS LONG AS THE NEW EARTH EXISTS, THERE WILL BE A NEW HEAVEN. BUT IN THE END, EVERYTHING WILL BE ABSORBED INTO THE ONE AND ONLY VERY BEAUTIFUL SKY, WHERE THE ETERNITY OF STAYING CLOSE TO GOD WILL BE SO MAGNIFICENT THAT NO DESCRIPTION WOULD BE ADEQUATE.

“Heaven and Earth will disappear, but My Words will not pass.”

The book, “The Trial of America By God“, is a story of faith. It is the faith of a humble woman who let a force, she knew little about, take over her hand and guide her pen. And it takes the faith of the reader to accept these words for what they are, messages from Heaven. In 1968, Marjorie Sampair was living in a modest home in Tacoma, Washington. “She was an average woman who was busy with the affairs of her family, before she was called on by God to write a book.” You can find the story in the beginning of the book. For now, we would just like to give a brief explanation of how it was written. This book was written as many of the books in the Bible were written, through a form of writing known as automatic writing. The pen is held lightly in the hand and begins to move seemingly of its own power. In Numbers 36:13 we read, “These are the commandments and judgments, which the Lord commanded by the hand of Moses to the children of Israel.” There are many other examples given in the Bible. A list of examples of how God wrote through the hand is available. While we do not wish to suggest that all automatic writing is from God, by your faith you will have to decide as to the authenticity of this book. Why was this book written? That question is best answered by Heaven. So read the excerpts given here, and pray to the Queen of Heaven for the gift of Faith. She will take your request to Christ, Her son. 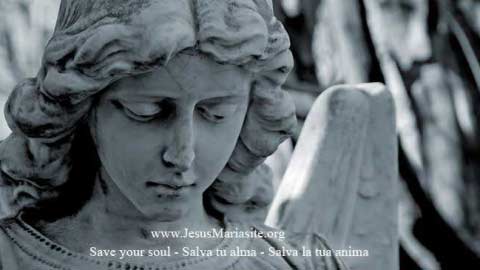 Chapter 14: All those who worship Satan and bear the sign of sin on their souls, will be lost....

Apocalypse Revealed: How Mary will crush the head of satan

Chapter 4: The Most Blessed Virgin Mary, despite everything, will crush the serpent's head under...

Chapter 6: My true children who pray the Rosary every day that You granted me to give them. You...

Apocalypse Revealed: Melvin the Angel of the Warning

Apocalypse Revealed: The Sign of the End, To the Churches

Apocalypse Revealed: The Kingdom of God